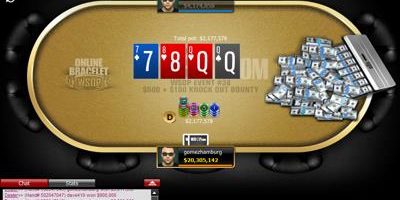 The final table started with BoatyBoatz8A being eliminated in ninth place. He won $7,380.72 after he got all in for five big blinds against Pretabotones. He could not catch up and was sent home in ninth.

B3ndTheKnee was the next to fall, he was also eliminated by Pretabotones and collected $9,583.92 for his eighth place finish. With seven players remaining, Turko held the chip lead, De Silva was in fourth place.

De Silva moved up the leaderboard when he eliminated johnsonck. Johnsonck got his final 11 big blinds drawing pretty thin. He found a pair, but needed more and couldn’t find it. He was eliminated in seventh place and won $12,668.40.

De Silva now held the lead with five remaining and Nodes was just behind him. Nodes and davidas777 both took pots off Turko before, finally, Turko busted in fifth place — getting a little more than a big blind in againstPretabotones. He won $22,748.04.

Then it was Pretabotones who hit the rail, losing to Nodes after flopping top pair. Nodes turned better and held the lead to eliminate Pretabotones and send him to the rail with $31,065.12.

Nodes battled back and actually took the lead. At one point, Nodes took a three-to-one chip lead before De Silva doubled up. It took roughly ten minutes for De Silva to finish off Nodes and claim his third WSOP bracelet.

Here are the final table payouts: